Please be informed that when Wifi6 and WPA3 are in action, this tool is no longer effective! Meanwhile, most up-to-date Wifi5 router is not vulnerable to deauthentication any more. Therefore, this project is discontinued due to useless!

WAIDPS (Wireless Auditing, Intrusion Detection and Prevention System) is written in Python 3 and working well on Penetration Testing distributions, such as Parrot Security OS 4.0.1 or later. This is a multi-purpose tool that is designed for penetration testing as well as wireless intrusion detection and prevention.

It stores all wifi information that harvests from the surrounding. Therefore, it is very useful for penetration testing especially for MAC address filtering and SSID hidden access points.

This project is original created by SY Chua of SYWorks Programming. However, it is no longer maintained by him since 2014. The GitHub version is v1.0 R.6 and it is dated Oct 10, 2014. Meanwhile, the demonstration in his tutorials and Youtube videos are displayed v1.0 R.7 dated Oct 11, 2014. It is considered as abandoned project.

On the other hand, this software is a very good design in screen layout and good operation experience. Since v1.0 R.6 will crash especially when handshake is captured and it is not working properly on Kali Linux 2017.2, Samiux fixed the problems and ported to Python 3. It also support IEEE 802.11ac (2.4 and 5 GHz bands).

This project is an open source project and it is released under GPLv3 by Samiux.

It is well tested on Parrot Security OS 4.0.1. Other penetration testing Linux distributions may work too. However, it does not compatible with Kali Nethunter. 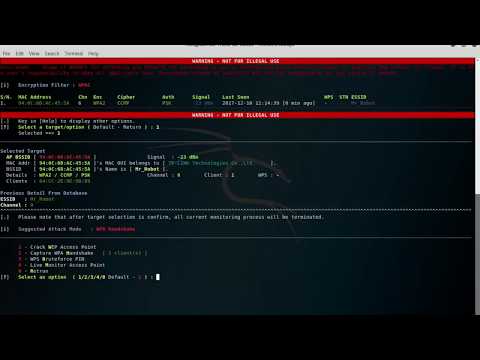 [+] Fix for crashes when handshake is captured
[+] Some minor bug fixes

[+] Kill processes at the beginning

Follow the instruction on screen to install the required files. It will then run the program directly.

Please leave it scanning for several minutes (warm up) before continue the operation.

You can run it at ~/waidps/ as root and all the captured files are at /root/.SYWorks/Saved/ directory.

On every update, please copy the new script(s) to /root/.SYWorks/WAIDPS/ to make sure the script is working properly.

Q : Why does deauthentication not working?

A : There can be several reasons and one or more can affect you :